If you hear a T.V. commercial with the tabla and the flute in the background, Jeff Whittier most probably created the Flute. 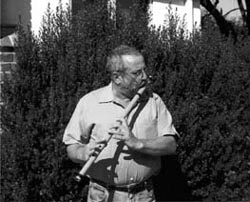 If you hear a T.V. commercial with the tabla and the flute in the background, Jeff Whittier would most probably have created the flute. In a career spanning over 34 years Whittier, a world-renowned bamboo flute maker, has made over 30,000 flutes. This master craftsman's creations have graced Broadway shows like The Lion King, Aida, The King and I and Miss Saigon, besides the hands of maestro's like Pandit Hariprasad Chaurasia and David Philpson whose credits include Xena: Warrior Princess.

Nevertheless, Whittier is humble to the point of self-deprecation, "The first 1,000 were not very good." Even by that account putting 29,000 plus, good flutes on the planet is no mean achievement. It becomes more staggering when you put them in the perspective of his versatility. Whittier makes many different types of flutes: Pannalal Ghosh Style, Hariprasad Style, Bansuri equivalent of the silver flute, South American flute and the Chinese flutes.

Flute making is only of the many hats that he wears; he is also a flautist, teacher, and activist all rolled into one. Whittier plays many instruments : the Sarangi, Guitar and the Tabla and is planning to make a CD this year. Learning under the tutelage of the flute maestro, G. S. Sachadev, Whittier has performed in about 100 concerts, innumerable weddings and restaurants and written a self published book, Playing the Bansuri - A Manual for North Indian Flute, besides giving flutes lessons to an ever growing number of students.

Like most innovations, his foray into flute making was triggered by necessity. He had been playing the flute for some time when he realized that high quality flute repairmen were hard to come by. "It was the brother-in-law effect!" he jokes. Meaning that the Indian flute makers would save the best flutes for their brother-in-law [read favorites and proteges] and pass of the mediocre ones to Westerners with their seemingly non-discerning eyes. It took six years of trial and error before he perfected the art of making flutes. Now it takes Whittier an afternoon to fashion a flute, the bamboo for which comes from Hawaii and India.

The Bansuri [Hindi: bans [bamboo] + swar [a musical note]] is the most highly developed of all flutes and extraordinary in its structural simplicity. Lord Krishna, one of the most revered Hindu Gods, played the bansuri. Mentioned in the Vedas [ancient Indian scriptures], the flute form is known to be one of the most ancient musical instruments. Despite its long-standing presence, the bansuri has been a classical instrument only since 1940's. Earlier the flute was generally used as an accompaniment in folk music.

Structurally, the bansuri is a cylindrical bamboo tube, with one sealed end and uniformly placed six or seven open finger holes. The holes are in alignment, except for the last one [placed differently depending on whether the flute is to be played by right-handed or left-handed musicians]. Some musicians play the last hole with the help of a bamboo key [ in case of very long flutes ]. All bamboo flutes are wrapped with nylon cord and periodically oiled with mustard seed oil or walnut oil to prevent cracking.

The structure of the bansuri and the absence of keys impose limitations and some complicated ragas [compositions] are beyond the scope of the flute. Nevertheless maestros like Pannalal Ghosh, [who brought the bansuri into the fold of classical music] were able to transcend such limitations.

The Hindustani Sangit [North Indian music form] bansuri is longer and permits two octaves. The bansuri in Carnatic Sangit [South Indian music form] is shorter with eight holes and its musical range spans two-and-a-half octaves. The seven holes of the older models in Hindustani music permitted each note of the saptak [the Indian scale] to be played through a separate hole. The notes were to be played in ascending order by first closing all the holes, and then opening each in quick succession.

Bamboo is the preferred material, because it produces a cornucopia of overtones in terms of sound quality and user dexterity that cannot be produced in metallic flutes. Pannalal Ghosh's innovations in the development of the bansuri included the creation of a larger instrument of more than thirty inches in length, creating different bansuri's for left handed and right handed players and the addition of the seventh finger hole which extends the range of the instrument, while also allowing for the more accurate rendition of many ragas [compositions] and the development of the bansuri. Pannalal Ghosh could also successfully adapt the classical vocal style and present it on the bansuri. As there are no keys to produce sharps and flats, all accidentals, microtones, as well as meend [Glissandos] are produced by a unique fingering technique.

Whittier believes that this fingering technique has been overstated. "More than how one holds the bansuri, it is important to know how to blow as that makes all the difference." Breathing and tongue techniques are the key in playing the flute. Altering the breath-force allows for octave changes while tonguing techniques, including pressing the tongue against the back of the teeth - make for a wider playing range. Whittier started playing the flute some time in the late sixties and his dedication to the bamboo flute has stood the test of time. The decision to turn professional was taken sometime in 1975 after four years of intensive study in the Ali Akbar Khan School of Music.

I started my conversation with him asking him the standard question that I was sure zillions of people had asked him before me, "What made you, choose an instrument like the bansuri, which is not your typical mainstream American instrument ?"

Whittier was quick to correct and as he so eloquently put it, the real question was what made him stick with it. The '60s exposed Whittier to a great deal of Indian Music. Drawn towards the bansuri he started pursuing it actively. The bansuri satisfied his spiritual needs and his spiritual teacher Mother Mary Meier [from England] encouraged him and assured him that the bansuri was his calling.

Whittier started studying under G. S. Sachadev in 1971 and has played it full time ever since, except for a short part time stint as an accountant for a couple of years. Whittier has great regard for his flute teacher, Sachadev, whose persistence and dedication he considers to be exemplary. Asked about where he picked up his accounting skills, he quips, "The federal prison."A maverick, Whittier spent one year in a federal prison for his anti war involvements in the mid sixties. "I got a lenient sentence, because the judge caught the FBI lying in my trial."

Although he plays other bamboo flutes, Whittier's heart lies with the bansuri. In his opinion other Bamboo flutes, like the Chinese flutes and the Japanese flute, are only bamboo on the outside as they have lacquered and ceramic interiors. For Whittier, playing each raga [compositions] is a blissful experience.
He says, "The ragas are the consensus of master musicians. The possibilities of combination within a raga are infinite as the edges are fuzzy. After the intensive effort spent in learning the raga, it is almost as if the raga comes out from you, and is playing itself through you."

Whittier is disillusioned with the lack of public support for artists. "Society does not support the arts in general. Over the years it has become harder for artists to survive. For example, the Internet generation takes downloading music for granted. Every now and then one hears about an artistic non-profit going bankrupt. It's almost like the '60's and '70's never happened."

While Whittier's relationship with the bansuri has been a sweet one, its other fallouts have not been as sweet. Support has been hard to come by. Parental opposition, financial difficulties and a subsequent divorce have all take their toll. His kids play the tabla, the violin and the bansuri; he encourages them to play the violin more, because of its mainstream acceptance.

He talks about his future goals : putting his children through college and then eventually performing in India, the land that gave birth to his instrument. A member of the Theosophical Society, Whittier has been to India three times. "I feel very much at home in India." he says about his long and vibrant association with India. "When I go there, I feel at home, when I come back here, I get a culture shock !"

Survival in any field is difficult, more so if one is a musician or an artist. For a beginner who does not know which level of the success pyramid he is going to land up in, Whittier offers a few pieces of advice. "Get good computer skills, so that you can work part time. Play for the love of music and don't expect to be successful. Play well at every venue, be persistent and be contented."

Whittier's personal favorite venues are weddings, the joy and the energy of the occasion lending their color to the bansuri. His only regret ? "I should not have sold my bansuris in the '80s at those ridiculously low prices. I am surprised that I even made a profit!"
His final take on the craft, "Every budding player should remember that when you get your piece right, it is the beginning of your practice not the end."